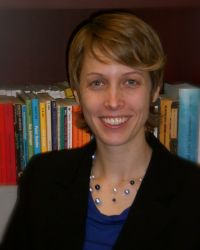 Twentieth and Twenty-First Century German and Austrian Literature, Film, and Popular Culture; Gender and Sexuality Studies.
Recent and forthcoming publications integrate queer theory with investigations of the hermeneutics of popular as well as canonical texts. She looks to Karl Philipp Moritz’s late eighteenth-century novel Anton Reiser for an emerging vocabulary of same-sex attraction at a time in which queer desires could not be articulated. She also examines the interplay between boundary-crossing genders and sexualities and the conventions of contemporary genres such as the detective novel. Her forthcoming book, German Feminist Queer Crime Fiction:  Politics, Justice and Desire, is the first book-length analysis of German-language lesbian crime and detective literature. She is also beginning work on a study of the connections between architectural and geographic spaces and representations of queer ethnicities and sexualities in film from the Weimar period to the twenty-first century.

In her free time, she samples exotic cheeses and watches cheesy movies.